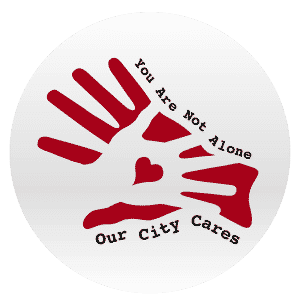 Suicide is both an individual choice and a community problem.

The key is uniting a community’s voice to speak hope !

Our City Cares Campaigns exist to unite businesses, churches, non-profits, city governments, and schools to combat the tragedy of suicide. The sheer magnitude of this problem is too big for any one entity to combat. By uniting together we can and must make a difference.

The campaigns consist of five initiatives, three community based, and two faith-based.

When someone dies by suicide whole communities are impacted. It sends a subtle message of hopelessness that spreads in a community like ripples in a pond.  Awaking its impact again when someone else makes the same tragic mistake. We are uniting communities to speak hope to the hurting and their perception of the loss of hope.

Our unexpected messages of hope can change the ripple effect by interrupting the negative cycles of thought with a positive message and a phone number to call for help. Their life does matter, they are not alone, our mistakes don’t define us and there is a place to call for help. Suicide does not end the suffering of one, rather it transfers and multiplies it to the survivors left behind. Suicide is not the right answer.  We are bringing universal messages of hope and connecting the hurting to services. There is hope and help.